Surf Camp Welcomes John Larkins Back to our Team!

John was born and raised right here on our local Wilmington, NC beaches.  From his earliest memories he can recall playing in the sand on the south end of Wrightsville Beach watching his dad surf.  This led to riding his first waves at age 10 on his dad’s 1985 Action twin fin. Over the years, he has developed a deep passion for coastal conservation and local pride in Wilmington area beaches. 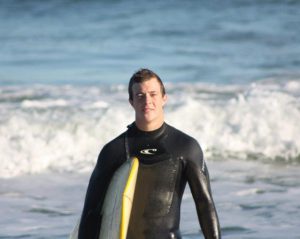 John got his start in the camp world in 2010, working for a traditional overnight summer camp in the mountains of North Carolina. This ignited a passion for educating kids and teens that led John to pursue an Outdoor Experiential Education degree from Appalachian State University.

Wanting to combine his passion for teaching with a lifelong love for surfing and the ocean, John joined the WB Surf Camp team in 2012 as the assistant director of our Guppy Ocean Adventure Camp. He then returned for the 2014 season as the camp’s director.  In 2015, he returned to work yet another summer in our teen overnight surf camps.  In addition to his camp experience, he has been an American Red Cross Certified Lifeguard since 2010, a Wilderness First Responder since 2014, and recently acquired his advanced SDI SCUBA diver certification.

John recently returned from Peace Corps service in Romblon, Philippines where he served as a Provincial Response Volunteer working in ecotourism development. He will be coordinating our overnight kid’s program, Carolina Ocean Odyssey.

We are super excited to have him re-join our team as a year round program coordinator!