How To Read A Surf Forecast

You just bought a new surfboard, a new wetsuit and you’re all set to jump in the ocean and catch the best waves of your life. The only thing left to do is get to the beach and the ocean is your playground. One question remains…will there be waves? 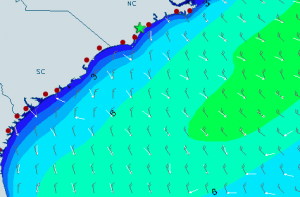 Before you can surf the best waves, you have to find them. It helps to have a basic knowledge of the conditions that generate and shape them. Fortunately, as a modern surfer, you can find a wave near you by using online surf forecasts.

Swell direction, wave height, swell period, offshore/onshore winds. No doubt if you’ve ever looked at a surf forecast you’ve come across these terms. They are all very crucial in knowing where and when to be to catch the best waves at the right time…but what do they mean?

Swell period is the amount of time is takes a wave to pass a certain point. The longer the swell period, the faster and more powerful waves will be. For example, the report may say 2ft at 15 seconds. Even though the wave is only 2ft, it has a 15 second period which means the wave is traveling from a longer distance (known as a ground swell) and will result in powerful waves. 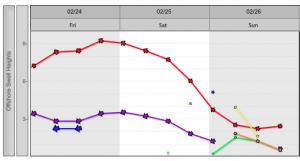 Imagine you are standing on the beach facing the ocean with a strong breeze in your face. In other words, the wind is blowing onto the shore…onshore wind. An onshore wind takes an organized, clean swell and turns it into choppy surf that is bumpy and more difficult to ride.

Offshore winds, winds that blow off the shore and into the coming waves, groom waves by lightly holding them up before they break. The only wind better than offshore wind, when swell is in the water, is no wind at all.

These are just a few of the many factors that go into forecasting waves and predicting when and where the best waves will hit. Being able to effectively use these factors when reading a surf report can be the difference between scoring the waves of your life or getting skunked. Happy wave hunting!