We have had the pleasure to welcome Heather Cunningham to our team as a Media and Marketing Intern this spring. We enjoyed getting to know her and want to take a moment to introduce her to our Surf Camp family!

Heather Cunningham is a junior attending the University of North Carolina Wilmington. She grew up in a small suburb, called Waxhaw, outside of Charlotte, North Carolina. She was raised there with her parents, older brother, adopted younger sister, and fraternal twin sister. Later her family moved to Topsail Island, and then to Wilmington where she happily resides now.

At UNCW, Heather is majoring in Communication Studies with minors in Art and Entrepreneurship. Within her classes, she focuses on media, branding, graphic design, and photography. She stumbled into the field of art through her love of taking pictures, habit of doodling in notebooks, and through learning various digital media methods in high school. She especially likes film photography and documentary work. 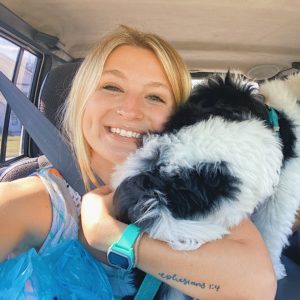 Heather and her dog, Wilma

Outside of school, Heather can be found skateboarding on her Carver, with friends, or listening to/playing music. She is an avid singer song-writer, and has been writing and performing her own songs since middle school on guitar. She later picked up ukulele in high school. She’s also loves ministry, surfing, and being outside.

Heather has experience at many different  jobs such as at Chickfila, 50 South Surf Shop, being a ukulele teacher for kids, and working for UNCW as both an orientation leader and photographer. Overall, Heather is a laid-back, happy girl who firmly believes in iced coffee, music, Jesus, people, and is excited to use her creative efforts for the ocean and surfing. 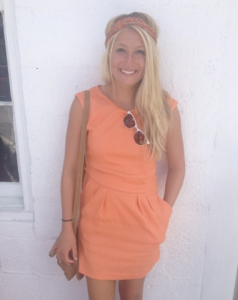