Hurricanes are something else. They are some of the strongest natural phenomena on the planet. This hurricane season tied the 2005 season for the busiest on record with 30 named storms. Named storms include both tropical storms and hurricanes but 13 of 30 named storms became hurricanes and 6 of those became major hurricanes (category 3 or higher).

Here in Wrightsville Beach, we are pretty used to hurricanes. Our houses are built to withstand all but the largest of storms, with reinforced framing, stilts, and built-in, heavy duty storm shutters. However, a lot of people are not familiar with these behemoths and many locations are not built to withstand them. This blog will give some basic facts about hurricanes from a local that has lived through many.

I have lived in Wilmington, NC my entire life. I have been through more catastrophic storms than I care to count, but I have gained a lot of experience in preparing and surviving them. So, first things first. What are the categories?

Categories (like category 1, cat 2, etc.) come from the Saffir-Simpson hurricane wind scale and start after sustained winds become stronger than a tropical 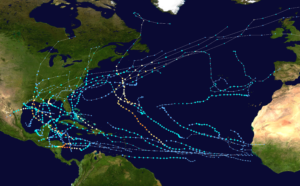 “It’s not THAT the wind is blowing, it’s WHAT the wind is blowing.” Hurricane damage is a lot more than just wind damage. Category 2 and stronger storms can rip the roofs off houses or blow down trees (more likely), but the most common damage is from flooding. These storms can drop massive amounts of rain in a short amount of time which leads to flash floods. As all the water drains, the rivers can be in flood stage for weeks. During Hurricane Florence, Wilmington, NC became an island for almost 2 weeks. All roads were blocked by water and they had to helicopter in supplies.

Storm surge is another form of flooding. As the hurricane travels over the ocean, it is literally blowing water out of the way. This can cause massive waves, but it also pushes that water inland like a massive hightide. This typically only affects low-lying coastal areas.

Some other factors that determine the severity of a hurricane on a specific location, are the speed it is moving, proximity to the eyewall, direction of approach, and tornados. If a storm is moving slowly, it can be more severe because the place is then getting hit with sustained winds for longer and with more rain in one spot. The closer you are to the eyewall, the stronger the winds. On that note, “landfall” is specifically where the eye of the storm hits, within hundreds of miles of landfall can be affected by the storm (they’re massive). The direction the storm comes from can determine how strong it is when it gets to you. A hurricane over land can weaken, direct hits from the ocean are often the worst. Tornadoes can form farther away from the eyewall, where the outer bands of the storm are interacting with local weather.

So, all that sounds a little scary and to the unprepared and inexperienced they are. Let’s give you some peace of mind. As previously stated, our buildings are built to hurricane specifications. State and local news do give good updates and information. Preparations can be made to minimize damage.

Here are some tips for preparation: 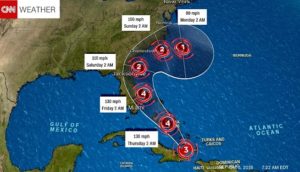 “Hurricane Matthew likely won’t strike the US for another day — but after seeing its devastating impact on Haiti on October 4, 2016, many are not taking chances. “

First and foremost, listen for local updates and learn when new updates come in. You can tune in at any time to local news and the weather channel during/before a storm. Here you will get the status and location of the storm, possible paths of the storm, tips, and evacuation notices. Pro Tip: during pre-storm times until I lose power, I keep the weather channel on, on low volume in case of emergency updates and tune into it during live updates. If you sit and just watch the news, you’ll see they repeat themselves outside of updates and it is no longer helpful. If they tell you to evacuate, evacuate.

Under mandatory evacuations, help will not come until the evacuation is lifted. You may see that some people still stay but they are literally taking fate into their own hands. Having had to evacuate before, I can understand how difficult it can be as a local to leave your life to survive. You should evacuate. That’s heavy, but it can save your life.

Under a voluntary evacuation, non-residents should leave. Travelers and tourists haven’t prepared for the storm and could be stuck in their location without power for weeks. Under these types of evacuation orders, the government will often give suggestions for people who should leave (non-residents, people in low-lying areas, etc).

Most people underestimate the power of storms, so they do not prepare or listen. Then they get stuck and don’t have power, fuel, or food.

For WB Surf Camp, we have a tiered plan for every stage of preparation for each category of storm. Because we have youth participants, our plan during camp is pretty conservative. We decide depending on proximity if we are going to move campers inland or send them home. A lot of factors are looked over by a lot of very experienced professionals. In 19 years of running programs, we have only had 2 years where we have had a hurricane make landfall here during the summer season, 2014 and 2020. Both times we evacuated campers inland and were able to resume program safely after the storm passed. We made the conservative, correct call.

I will go into the “wait it out” preparation in part two of this blog.