For the most part, wave sizes like “small” or “big” are relative to the individual surfer. We can measure them, of course, in feet or meters, by body height, by the height of the face or the back of the wave, but “small” or “big” surf is relative. The beginning surfer can look at a waist high wave (3’ roughly) and it looks huge, especially when on their bellies looking up at the wave coming at them. A proficient surfer could say its not big unless it is over head-high (5’-6’ roughly). Pros could call 10’ to 12’ their bread and butter. Small, big, or fun descriptors for waves often speak to the individual’s skill level and comfortability. But what about big wave surfers? Where do they fall? Big wave surfers are watermen who paddle or are towed into 20’ waves or bigger. Even still, “big” is relative. Some of the biggest waves ever surfed (off of Nazare’, Portugal) are in the 80’ range. Now, I don’t care who you are, that’s huge. Because of the recent headlines coming out about Nazare’, I wanted to talk about some of the other most well-known big waves spots and some cool things to check out to learn more about them.

Possibly the most well-known big wave spot is Waimea Bay in Hawaii, where big wave surfing was pioneered. Check out the documentary Riding Giants, about the guys who were crazy enough to paddle Waimea in the 1950s and big wave surfing evolution. There is also Jaws near Pe’ahi, off of the north shore of Maui. Here the waves can get up to 60’ between December to March.

Next, we have Mavericks, off of Half Moon Bay in California. You may have seen Chasing Mavericks with Gerard Butler. This takes place around the story of Jay Moriarty preparing to surf Mavericks as a teen. It is pretty dramatized and takes some artistic license with Jay’s story, but it does give a good view into Mavericks. An iconic picture of Jay’s “iron cross” wipe out off the top of a massive bomb made the cover of Surfer Magazine (right most picture). This picture and the volume of Surfer Magazine showed the power of these waves and really brought Mavericks to world popularity.

The piece de resistance is Nazare’, off the coast of Portugal. This is the reason for the blog today. Nazare’ provides some of the biggest ridable waves in the world, with the current world record for big wave surfing. Because of its unique bathymetry, when conditions are right waves can come into a beautiful and massive A-frame peak. Recently, Nazare’ made international popular news for the massive swell coming in. Big wave surfers from all over the world dropped everything to surf the swell. Even one of our Wilmington locals, Mason Barnes (pictured left), surfed there this past week, catching one of the biggest waves of his life. 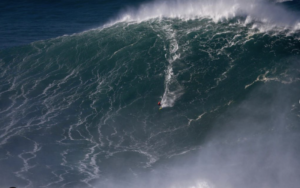 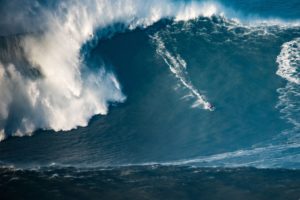 Teahupo’o off of Tahiti gets an honorable mention. It is an extremely heavy wave because of how swell hits the reef. It isn’t typically as big as the pictures below but it is usually a heavy wave even on smaller days. It also breaks in very shallow water over reef, so it is pretty dangerous, but can produce some of the most epic barrels in surfing. Check out “Code Red” about one of the biggest swells to come through Teahupo’o on youtube. These spots are important to the surf community but potentially less well known to the non-surfing public. 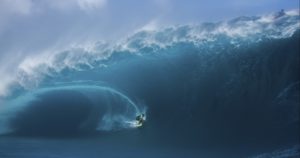 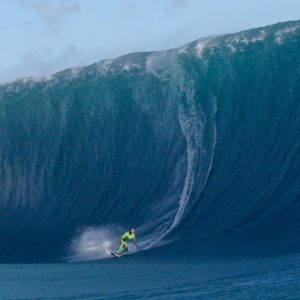 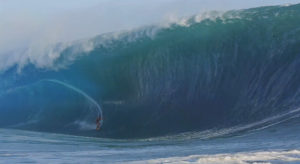 Even though wave size is relative, I am going to leave “big” wave surfing to the highly trained professionals. It is crazy that even the guys who surf them started on something small to learn. I am not saying big wave surfing should be your goal, but if you spend enough time in the water your comfort level will expand and soon those 3’ waves won’t look so big anymore. Also, keep an eye on the news and do a little digging into big wave surfing. It is an awesome sport that pushes the technology of surfing. The movies and documentary above are good starting points. Food for thought.